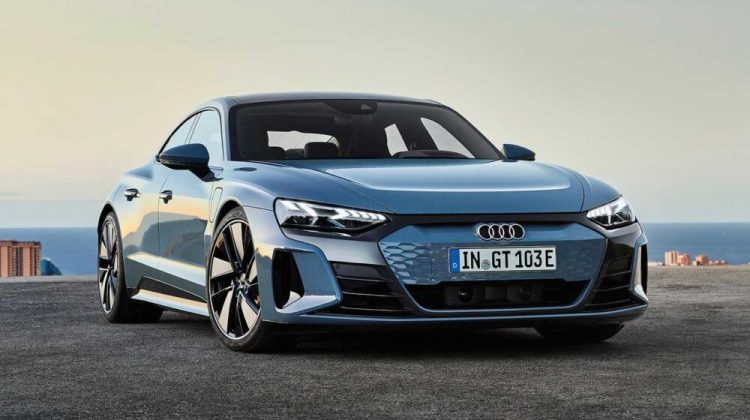 The E-Tron GT is Audi’s contribution to the world of ultra-fast executive electric Sportback family haulers like the Tesla Model S and the Porsche Taycan. The latter EV shares the same J1 platform built by Porsche.

The E-Tron can be had in two variants, the base GT, and the GT RS. The GT variant features two electric motors, that combine to make 522 peak hp and 640 Nm of torque.

The E-Tron GT is powered by a massive 93 kWh lithium-ion battery pack but its maximum energy output is 86 KWh. Like the Porsche Taycan, both the variants of the E-Tron GT come with an 800 V charging capability that enables rapid charging. The battery can go from 0 to 100 percent in just 22 minutes with the 270 kW DC charging.

The GT RS variant can also go from a standstill to 100 kilometers per hour in just 3.1 seconds, and the base GT variant can do so in 3.9 seconds, which are both blisteringly quick 0-100 kph times. Moreover, the vehicles can do so without emitting any noise or environmental pollution, which is their main appeal.

The E-Tron GT can fulfill only the desires of the top one percent of the Pakistani public as its price of Rs. 2.3 crore is an astronomical amount of money that not everyone can pay easily. However, it is subjectively more sensible to spend Rs. 2.3 crore on a beautiful, ultra-fast, and uber-luxurious executive sedan than to shell out over Rs. 4 crores on a fuel-guzzling truck like the Toyota Land Cruiser.

It may be argued that the latter is relatively easier to maintain and has a better resale value in the local market and that the EV charging infrastructure is still too weak for cars like the E-Tron.

Nevertheless, with the upcoming EV policy, more gates to the realm of EV market development may be opened to ultimately benefit EV owners in Pakistan.

What you say let us know in the comments box